Two Saturdays ago, I had the awesome opportunity to do a run with Dean Karnazes who is part of the Zozi Guru program. 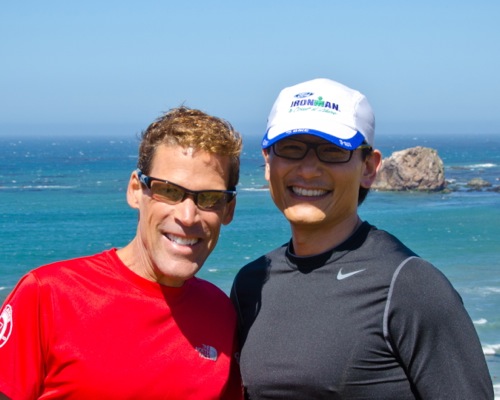 The day was beautiful and the run was out in Big Sur. We ran through groves of poison oak which was not fun, but the day was sunny and not cold and more than made up for stressing about whether or not I was going to get a ton of itchy blisters.
I’ve been following his exploits ever since he wrote Ultramarathon Man which is a great read. Since then, he’s been an inspiration to me as an Ironman triathlete and marathoner. Endurance events take a certain mindset; some people can’t enjoy the long hours on the road but you gotta be able to last to the end. Somehow, I’ve come to enjoy the long hours out on my bike, or running on the road. After I fixed most of my running issues, I too have come to just love running for the sake of running.
Thus, it was a real treat to run with him and hear some of his philosophies on running and on life. Here were some of the stand outs:
Technology is Great for Kids Especially in Keeping in Touch
Dean recounted a conversation with his wife on whether or not to give their kids mobile phones at such an early age. His wife was skeptical, but he prevailed. Later, he travelled away to race and after the long race, he texted a picture of himself at the finish line and his kids responded within seconds! Since then, his wife became a believer. Since Dean spends a lot of time away from home, technology has helped keep in touch with his family no matter where he is.
Overspend on Bringing Family to Races, Make it Something to Look Forward To, Not Dread
Dean likes to make each race he attends a major event for his family. Since he does so many of them and sometimes they are in very remote places, he overspends on them to make them extra special. In this way, he makes his races something his family looks forward to, rather than avoiding because they aren’t fun to go to.
Training Distance is Very Individual
I asked Dean about typical training programs for ultramarathoning. I noted that some of them I found on the internet ran never over marathon distance. Was that enough to complete a 100 mile race? He told me that in his travels, he has met some great runners who only train up to marathon distance, and some that train nearly up to the distance of the race itself. He is of the opinion that some can race well by training only marathon distance, but some need to train longer distances. It is very individual and the only way to find out is to try it yourself.
Runs with High Leg Turnover
This is consistent with current run form teachings – higher turnover prevents overstriding and is less stressful on the legs.
For Downhill He Uses Wider Stance
This is something I discovered myself. When I go downhill, I take a wider stance and run down hills almost crab-like. This was in reaction to the fact that I sprained both ankles, one after another about 2-3 months apart when I trained for the Honolulu Marathon (and didn’t run because of it). I attributed to the fact that my feet were too close together and as a result, when I caught the edge of my running shoe, it caused a sprain. With my feet further apart, this was much less likely to happen. It is also more stable when you are moving fast downhill.
I am glad he tells me he does this too.
Balance in Life is Overrated
I found this to be the best comment of all.
He mentioned that he would go run a marathon nearly every day out of joy and for training. But then he pointed out he had kids, a wife, and a full time job – not to mention travelling and doing speaking gigs. We then wondered – how the heck does he find time to run a marathon every day?
That’s when he gave us the secret. Yep. Balance in life is overrated, especially when you love what you’re doing. Just suck it up and do it all.
Love it.