It was shocking to see/feel my mental resolve fizz away so suddenly. I had experienced lapses in resolve before but never as large as this time, half way through the marathon of Ironman WA.
In the past, my resolve has weakened at the “wall” of a marathon, where my body just seems to get really tired. But here there is definitely more physicality involved where my body is getting to that point where between shifting from the previous way of burning energy and the next.
At Ironman NZ 2005, I hit that point with about 3-4k left in the run, but bust through it knowing that my friends were waiting at the finish line for me and would bust my butt if they knew I was walking to the finish. At Ironman Austria 2006, I was too busy dealing with cramping leg muscles to worry about disappearing mental resolve. Likewise, at Ironman Brazil 2007, my poplitius muscle being really sore made me walk through much of the run until I initiated the Ironman shuffle. But I didn’t feel a lowering of my resolve, perhaps because I was distracted by pains?
This year at Ironman WA 2007, it was really miserable. I got to 20k in the run (about half way) and my mental resolve just disappeared. Poof. Vanished. It was a shocking moment. I could not run at all. I would just run a bit and then resort to walking. And it was definitely mental. My legs were OK, except for some cramping in the right hamstring which seemed to go away later. Every time I did actually run, my pace was quite good, so it couldn’t be a physical thing.
I think it was a combination of factors.
My coach M2 thought it might be because of the long season, and this being my second Ironman of the year. Also, it was on the heels of another key race for me, the NYC Marathon. And not to mention all the other smaller races between IM Brazil and IM WA. These all could have sapped my ability to maintain focus.
I also think it was the bike leg during IM WA. I had to focus so much on maintaining constant wattage output with virtually no breaks that by the time I reached the run, my mental endurance was already lowered greatly.
This being my longest race season to date, and a full one too, I am somewhat not surprised to find such an issue popping up towards the end of the season. I am hoping as I race more, I will get tougher mentally as I encounter problems like these for the first time, and then I will be better forewarned and armed next time around.
Maintaining iron resolve through an Ironman is super tough and I look to train my mind smartly in 2008. I hope to train well physically to remove those barriers where my mind needs to deal with declining physical resources, and then my mind can focus on maintaining physical output through the entire race, especially when I hit the run.

Rounding the corner at a turnaround: 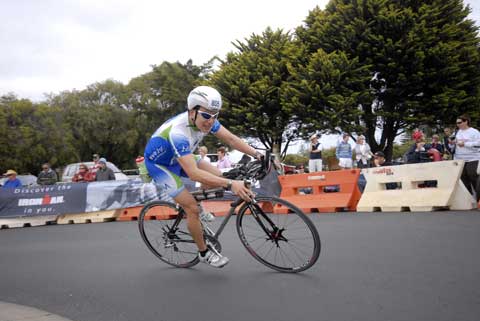 Recovery log:
Day After:
Not so bad. Stiff, but I was much worse off after the NYC Marathon. Walking down stairs was definitely a bit painful, but not as bad as in previous races. I didn’t get a chance to sit in an ice bath after the race, but it seems like my legs were coming back fairly quickly. Also, my aerobic system didn’t feel as bad. Usually I get this “cool” sensation in my chest and lungs and that doesn’t go away for a few weeks, which is a sign that I really pushed my aerobic system and caused some strain there! This time, the sensation was present but not nearly as intense.
+2 Days:
Definitely more stiff than the day before. I tend to get more sore 2 days after a hard workout than the day before. Rolling out of bed was pretty tough, but once I got moving the stiffness quickly diminished. Walking down stairs was also not nearly as tough as yesterday. But sitting in a bus from Busselton to Perth for 3 hours didn’t help. The “cool” sensation in my chest is minimal but still present.
+3 Days:
At this point, I’m rolling out of bed at 3am to catch a flight out of Perth at 545am. Stiffness is still there but very quickly diminishes as I get to the airport. I have on compression socks now for the long flight home.
+4 Days:
Getting up this morning was not bad at all. I still have a “cool” sensation in my chest but it is very, very minimal. After previous Ironmans, this sensation would stay with me for weeks. This time, it has almost disappeared after only 4 days. I got on my bike trainer and did some spinning which really helped clear my legs of all that post-race stuff. Thankfully, no pains at all and stiffness is pretty much gone.
I am heartened to see my recovery going as fast as it is. 2 years ago at IM NZ, it took me about 6 weeks to get back; last year at IM Austria, it was 4 weeks. Then this year at IM Brazil, it took about 2.5 weeks to get back. I guess it is possible to build the body’s tolerance for this type of thing up to a point where it can recover quickly and be ready for the next thing.
I have always been amazed at my friends who race much more often than me. They race Ironman and by the end of the week they are back to long, hard workouts. I wasn’t sure if my body would ever get to that point, but now that I see my own recovery happening faster, I can believe that I may reach that point.

EST took us on a wine tasting tour the day after our race!

Our second tour guide, Sharyn who gave us lovely facts about the flora and fauna of Australia, as well as being a triathlon coach! Here I hold an authentic Australian meat pie. Seems like Australians like these pies of all sorts.

Yes that little speck under the tree on the left was a real live wild kangaroo. See the closeup on the right. These guys hide under the trees in the day time and come out to eat during the mornings and evenings.

Wine tasting was fun. I was getting pretty sloshed on sipping wine due to my depleted condition from racing the day before. Takes one Ironman to make me a cheap date!

There’s me in ecstasy after tasting the Sandelera port, an incredibly smooth dessert wine that cost me $5 just to taste it.

Wacky sculptures were found at each winery, as well as fancy places to spit/dump your tasted wine. 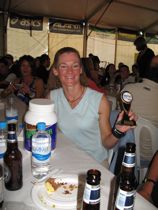 Congratulations to one of group, Donna, who took 3rd in her age group and got a Kona slot! She blew by me on the bike and I was in awe of her speed!

Here we all sit on the bus ride to Perth airport, all happy and depleted and sore. 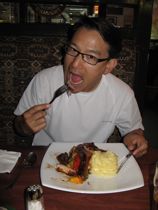 Of course, I could not leave Australia without sampling the local fare. In Perth, I found a microbrewery and ate kangaroo steak and lamb and crocodile sausages. Yum!

Some pictures from early morning at T1 amongst the bikes:

Again, I am surprised at the bike field at T1 being so empty. Only 997 competitors!

Check out the wacky folding bike with mini carbon HED aero wheels! I passed this guy out on the bike course.

Happy me, after the race, all showered and clean and eating chicken and rice in the finisher’s tent: 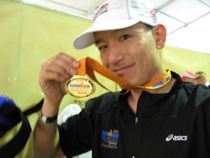 A while back I wrote about Raaaagggeeee and thought that I would rarely get into a rage state during a race. But not at Ironman WA.
Angry Dave showed up.
During the bike, there were periods of me remembering back to days of my youth, when all the bullies in my elementary school would beat me up, and all those people in high school and college, as well as in the workplace during my early career years. I’ve had many nemeses and hated them all. I swore at them, I wanted revenge for all the crappy things they did to me.
It drove me onwards through many portions of the bike leg.
That is, until that damn theme song from Flashdance would come back and the rage would just…disappear…
…what a feeling….

One last thing before the race report.
As we submitted our T1 and T2 bags, they made us take out everything and they searched them. We were (rightfully) asked if we had the main things, like our race numbers, shoes, bike helmet, etc.
But then they asked us if we had contraband substances. One of my buddies Keish was held up because he had some ibuprofen in his bag. They had to call an official to ask what that was and make sure it wasn’t illegal! Duh! It’s Advil, mate!
Whatever.
Well maybe people in Australia do cocaine or smoke a joint while racing. Guess they need to make sure we don’t do that.

Last post before the race…
Here I sit in the lounge of the Abbey Beach Resort, blogging away about the race. It also happens to be the only place in the hotel which has WIFI.
I’ve had a long day today preparing for the race. Hopefully I will get a good night’s sleep as I will be getting up at 3 am to eat and get my stuff together to go over to the race start. The race starts earlier than other Ironmans at 6:15am, but also ends earlier too at 11pm. Track me at the Ironman Western Australia site or at Ironman Live.
Full race report coming soon after the race!