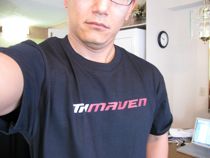 A plug for a buddy of mine who is developing a website for triathletes called TriMaven.com. He gave me this cool t-shirt to wear around at IM FL. Check it out – not sure if everything is working just right yet, but have a look. It’s got news, athlete and race profiles, social networking functions, and the ability to upload your workouts.

Just recently I’ve been asked many times for what books out there are good for training. Here is a list of my favorites. I tend to keep away from the coaching books as I have a coach and don’t need training programs or advice. I like to find books that help me understand the scientific and researched aspects of swimming, cycling, and running so that I am not reading some coach’s opinion, but rather facts that have been vetted through scientific methods. Here they are:
Total Immersion by Terry McLaughlin – great for body positioning drills but not so good on stroke efficiency. Check out the Total Immersion website for great DVDs on swimming.
Breakthrough Swimming by Cecil Colwin – history of swimming and how it evolved to the strokes used today. Contains lots of research as well.
Swimming Fastest by Ernest W. Maglischo – lots of science in here – a huge, thick book. Great stuff and the latest on training techniques.
Lore of Running by Tim Noakes – much research into the science of running.
Pose Method of Running by Dr. Nicholas Romanov – training to run on the balls of your feet, much MUCH easier on the knees!
Serious Cycling by Ed Burke – lots of great research into the science of cycling.
Workouts in a Binder by Gale Bernhardt and Nick Hansen – great waterproof workout book to take to the pool and do your own workouts. Workouts range in distance from about 1500m to about 4000m, with the bulk being in mid-2000s to 3000s.
Workouts in a Binder for Swimmers, Triathletes, and Coaches by Eric Hansen – like the previous, but only with significantly longer workouts into the 4000s and 5000m range. Great for Ironman training!
Training and Racing with a Power Meter by Andrew Coggan – ever since I bought a computrainer and then a PowerTap, I’ve been sold on power training. This book nicely explains it all in one place.