I discovered MobilityWOD (MWOD) last year and love the content they put up. It has really opened my eyes on my own problems and limitations, for which I never really had good solutions for – but now I do. My education on anatomy and proper movement and mobility has gone way up as a result of their presentation of the material – previously it seemed like you had to be some health professional to understand what was going on. All these big words and concepts – nothing ever stuck until now.
Becoming a Supple Leopard by Kelly Starrett of MWOD is an amazing book. His site is an extension of the book, kept up to date in real time with developments from him and his staff. While the content came out of Crossfit circles, it is relevant to any athletic activity.
In the forums, I posted this entry on how to start with MWOD. Despite the approachable nature of the material (formerly unapproachable in big medical and scientific terms), it is still a lot to take in. So here is my short cut (with minor edits from the forum post) to getting started with MWOD and how to diagnose and fix your particular problems:
I can feel for you. When I started going through the material, it was daunting. In fact, it still is as more gets added each day. And then, as my PT likes to tell me, year over year the philosophies can change (like Kstarr’s stance on icing, where it’s promoted in his early videos and not in his later ones). But yet those videos are still up! Dang it!
Here’s my suggestion for a template on shortening the process:
1. Get Becoming A Supple Leopard (BSL). Watch some of the early MWOD videos, Episode 1 and 2.
2. I would definitely spring for at least a month of PRO access to watch the webinars. They also give you a sense for the problem areas on most athletes. Once your understanding increases, your ability to address problems increase.
I would also highly recommend subscribing monthly to PRO. The videos there are updated daily in DailyRx, and there is always something new I learn, some little detail I missed the last time through.
3. I would then go into BSL and read the early chapters 1,2,3,4. Pay attention to the various tests there, like deep squat and evaluating external and internal rotation at the shoulders and hips. Try some of those. Are there any that you cannot do? If so, then work on that. That can give you a start on identifying which areas can be improved, even if you have no visible problems now.
4. Get a lacrosse ball, Battlestar Big and Little, Supernova, Gemini, Voodoo bands, Rogue Fitness bands green and black, Yoga Tune Up Alpha Ball and Therapy Balls (Yes this can set you back a lot of cash but it IS WORTH IT). Use these in your mobs (short for mobilizations) to work on those areas you want to improve.
Select a test like a deep squat that you want to improve. Use mobs for the relevant areas. After each mob, get up and test the squat again. If improved, remember this mob for future work. Keep going to next mob. stop, get up and test again, etc. etc. It can take days/weeks to achieve the full ROM in a given test or it might take an hour.
5. You can also use mobs to see if you need to work on an area. I often go down into banded distraction hip openers, only to find that I don’t have any significant corners to release. So i don’t hold those for 2 minutes but quickly move to the next mob.
6. Are you into a certain sport? There are videos that pertain to certain sports. that can also speed up the process by getting you to focus on a given area(s).
Yes there is a lot. i would slowly work into it. it’s all very interesting when you start digging in. and yes it is kinda overwhelming in the beginning.
If you live near a good MWOD trained PT or movement specialist, they can show you what a process looks like live. I did some sessions with Roop Sihota and it was awesome watching how he evaluates and goes through the process. I also video the session so i can go back and review later.
I loved the MWOD process so much that I went (and suffered through) a Crossfit Level 1 Trainer course, and am heading for the Movement and Mobility Prep Course, taught by MWOD staff.

About 3 weeks back, I tweaked my left knee. I was practicing some medicine ball cleans after I took a Crossfit Level 1 Trainer weekend seminar and on one of rise ups from the clean, my left knee must have drifted inward and I got a twinge of pain on the outside of the knee. I was hoping it would go away, but it didn’t. It lingered and was making my leg not feel correct.
I then remembered reading about how therapists were using the ARPwave electrostim machines to help people heal faster from knee injuries. I had already tried out their Search & Destroy (S&D). But going for only a session or two on a given problem didn’t give me longevity on the solution. The problem seemed to get better for a while and then it came back.
Also since I train with an ARPwave POV, we often talk about how to reinforce a training state for a long period of time. If an athlete can get to max power on the ARPwave POV and complete 40 sessions at this power with no compensation, they can maintain this heightened training state for as long as a sports season, maybe longer.
With this in mind, I thought back to the fact that my previous S&D sessions seemed to provide a solution to the physical problems I had, but it was short lived. I also thought to the fact that some people will rent one of their therapeutic machines, the RX100 or Trainer, and live with it for many weeks. Putting two and two together, I figured that if I were to rent a machine and use it nearly every day for many days until the problem was solved, then I could get more completeness in the treatment and longevity in the results.
I rented a Trainer from ARPwave Austin. Via a Skype video call, they led me through In-Balance technique (mimicking a technique that chiropractors do with physical manipulation), then S&D on the left leg. S&D found some “hotspots” on the top of my rectus femoris, and along my vastus lateralis, and another lesser “hot” spot on my vastus medialis (VMO). Choosing the two hotter spots, I put stim pads on them: 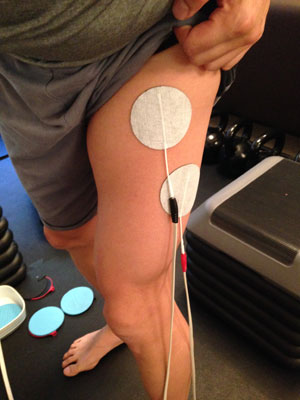