Two weekends ago, I attended the Progressive Calisthenics Instructor Certification (PCC) Workshop at Evolution Trainers in Mountain View, CA. When I heard that the PCC was coming to the SF Bay, I jumped at the chance to learn from the brothers, Al Kavadlo and Danny Kavadlo, who are famous on the internet for their amazing feats of bodyweight strength.
Up to this point, I had been playing with some bodyweight exercises, particularly the push-up, pull-up, and squat. But only in the squat had I made some significant progress towards the one leg version where after years, I could finally drop into a one leg pistol squat on an elevated surface. But the PCC exposed to me much more than just those 3! Certainly I had seen videos of people performing many different feats of bodyweight strength and many crossing into gymnastics. I had some videos and books on the subject but was lacking in some direct instruction. Thus I was looking forward to some live interaction with expert bodyweight coaches.
In the months prior to the PCC, I began to prepare for the certification test, The Century Test, which is completing 100 reps in this manner, within 8 minutes:

This is the men’s test. The women’s test is slightly different.
I basically started with sets of 3 for pairs of the movements. So I picked squats and push-ups for the first pair, and hanging knee raises and pull-ups for the second pair. I would do each pair of exercises once per week until I reached the prerequisite numbers for Century test. Then, I started putting it all together, stringing them one after another. Thus, by the time the PCC came around, I had completed the test 4 times through, and could do it straight through in about 3:40.
PCC Day One: Upper Body
The day started out with fun intros from Al and Danny Kavadlo. They are definitely a fun and engaging pair, and made for an incredibly entertaining workshop.
Today’s exercises focused on the upper body. These were the push-up, pull-up, the flag, and muscle-ups. We went through each exercise in detail, from easy to hard in the progressions. We would be shown an exercise and maybe some variants, and then we were given time to partner up and try them out.
Here’s Al cranking out a perfect one arm pull-up: 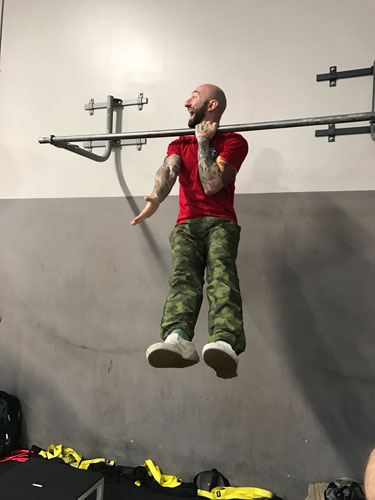 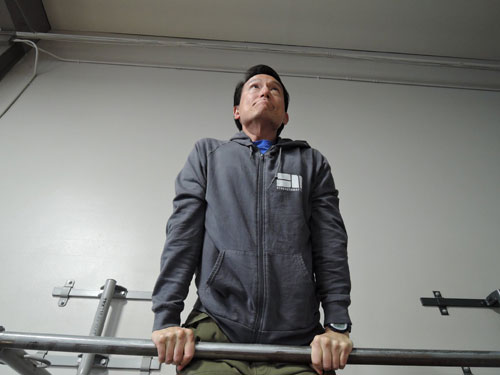 Yet another one of those elusive moves for me, but now I have a good plan to get there!
In case you were wondering what the human flag is: 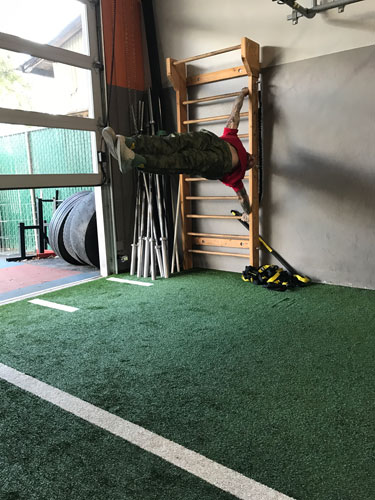 At the end, I got them to autograph my copy of Street Workout and they posed with me and the book: 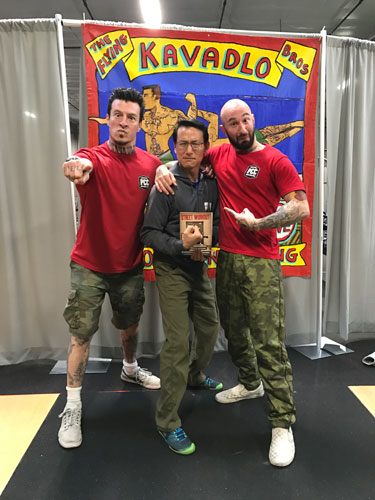 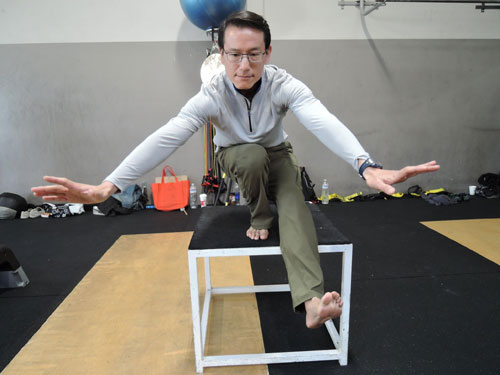 Al and Danny were amazing in their technique. They of course loved to pose for photos – Danny on Al’s bridge: 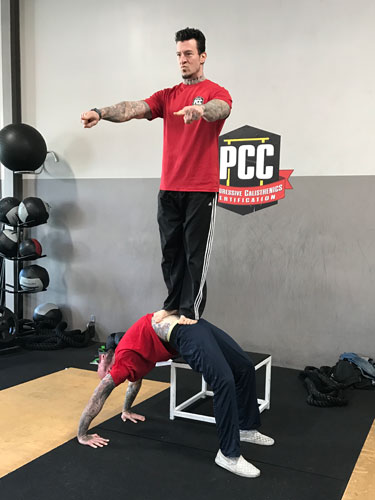 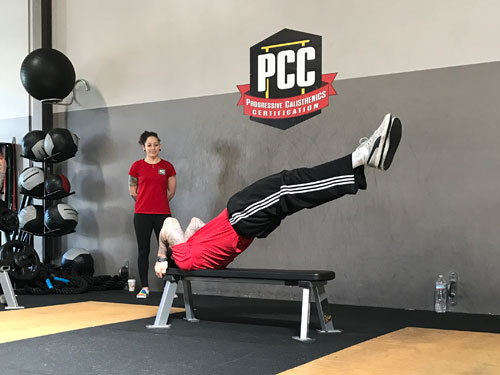 Al and the back lever: 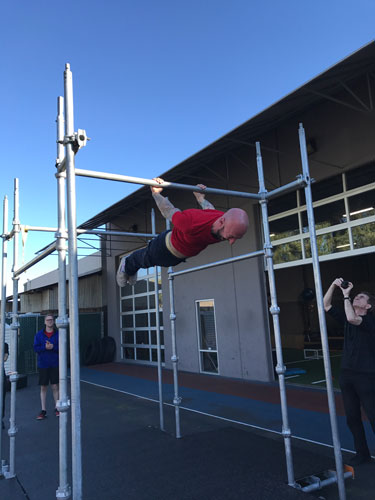 Danny and the front lever: 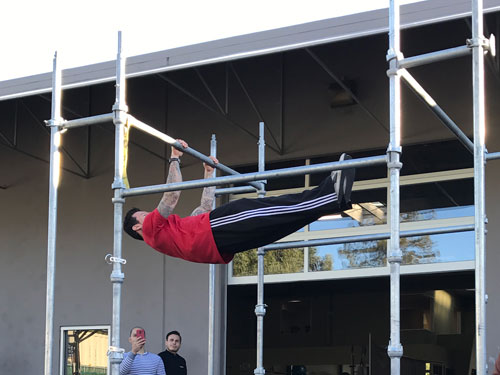 PCC Day Three: Balance and the Century Test
The third and last day found me kind of sore from the previous two days of work. Today we would concentrate on press levers, head and handstands.
Levers are HARD! But Al makes them look easy: 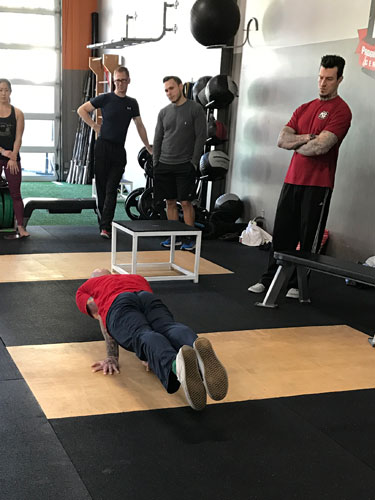 Ready to breakdance anyone? Unfortunately Al would not spin on his head for us: 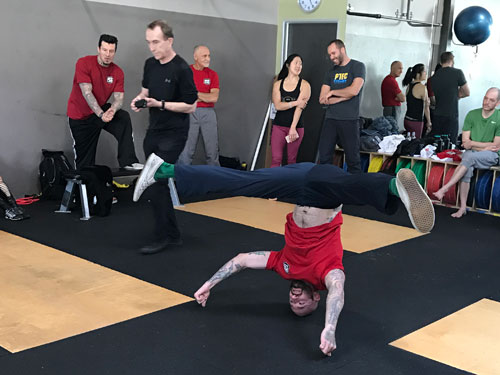 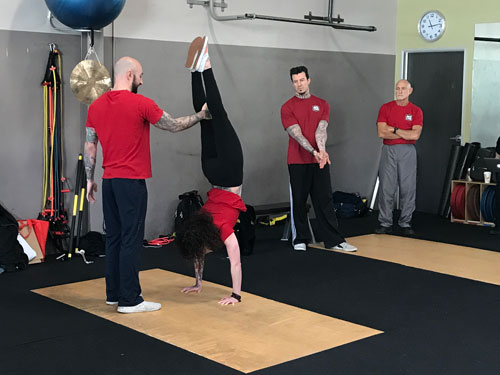 After a light lunch, we were ready to take our Century Test. When it was my turn, I hopped right in. Less than 8 minutes later, I passed and was certified! 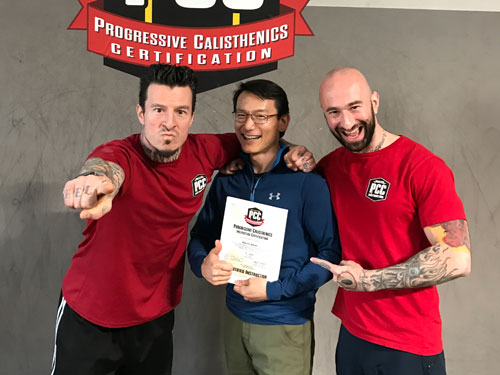 and here we are, the newly minted PCC instructors: 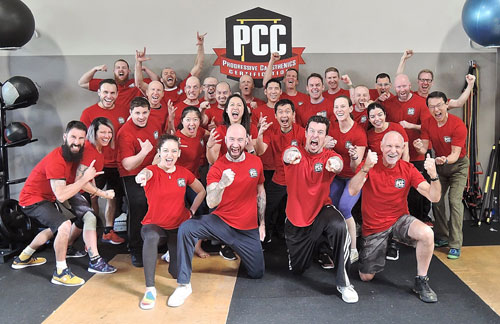 What did I think of the PCC workshop?
1. Al and Danny Kavadlo delivered brilliantly. They were extremely detailed in their teachings and dropped a ton of knowledge bombs. It is clear they’ve been doing this for a long time. They were also very entertaining and provided 3 days of fun.
2. When you work with a coach directly, they can give you a ton of tips and drills to help you achieve the final expression of each movement set. These are often missing from books and videos. Hearing it live always helps.
3. There was ample time to try everything that was taught. I liked their format where we were shown one or two things, then we broke up into pairs to try it out.
4. The PCC Manual is probably greater than 2″ thick! Lots of information to dive into!
5. I personally was glad to have had a bit of one on one instruction with the instructors. I hit a one arm push-up to a 12″ surface for the first time during the weekend.
By the way, the assistant instructors were also most excellent. Super high quality and lots of experience from them as well.
6. The Century Test for me was a dull roar since I had done it 4 times through already. But for many I think they were doing it for the first time. Not knocking anyone here, but I would think that if you paid $1000+ to go to a cert that wouldn’t you train for it so that you can pass there and not later?
I also highly recommend grabbing these books: Convict Conditioning, Convict Conditioning 2, and Raising the Bar, which contain a lot of the instruction found in the PCC. Of course any of the books by Al Kavadlo and Danny Kavadlo are excellent and should be read!
There are also DVDs: Convict Conditioning: Volume 1: Prison Push-Ups; Volume 2: The Ultimate Squat Course (now not in DVD but streaming); Volume 3: Leg Raises; Volume 4: Advanced Bridging; Volume 5: The One Arm Pull-Up Series and Raising the Bar DVD, all companions to the books.
All in all, I felt that the PCC was a fantastic course to take and am very happy to be certified as an instructor. I would highly recommend it if you’re into bodyweight training. I am now in GTG (Grease the Groove) mode with many of these moves and just practicing a bit each day, and hope to build on this over the next few months.