As some of you might know, I was at Yahoo! from 1995 to 2004, running their User Experience and Design team for nearly 8 years and then did a short stint in international before leaving the company. I really wanted to write a book about my time there since I was there from nearly the very beginning. However, I felt that a general historical account wasn’t something I should have tackled, but I could tackle one aspect which I got heavily involved in, which was online advertising.
I started putting my thoughts to paper with a friend who sat with me every week for about 2 years from 2008 to 2010. After that, I spent some months taking her text and reorganizing it somewhat into a narrative. Then, I left it untouched on my hard drive for about 5 years when I dusted off the file again last year in 2016.
With the turmoil that was seen at Yahoo!, I felt it was an opportune time to get this book published! Also, last year saw the rise of a startup called Book in a Box and consultants who could take you from book idea to published, in the event you wanted to self-publish and not go with a traditional publisher. So now that there were resources to help me get this done, I hired a consultant to help me. Always looking to learn, I elected to take the self-publish route and am learning a TON about getting a book written, published, sold, and marketed. I hope to follow up on this experience post-launch.
The book is called Takeover! The Inside Story of the Yahoo! Ad Revolution and takes you through the early days of online advertising, through the dotcom boom and then bust years. My thesis is that Yahoo! developed and drove a lot of how online advertising came to be today. We did a lot of things back then that are pretty mainstream now and probably wasn’t well known that we had explored many ideas and technologies, all developed in-house. I felt that it was finally time to bring this part of Yahoo! to light, just as Yahoo! has finished up its acquisition by Verizon and now is called Oath. 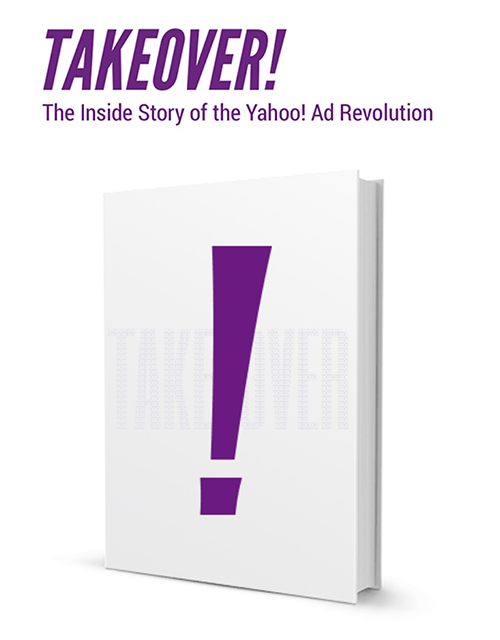 If you want to get updates on the book, go to my book page at YahooTakeOverBook.com, and sign up. As soon as I figure out things, I hope to give a discount code to those who sign up pre-launch of the book. Please go and sign up now and I thank you for the support!