Still just an apartment in SF! 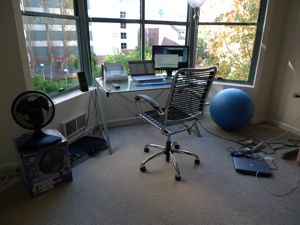 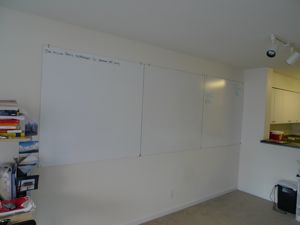 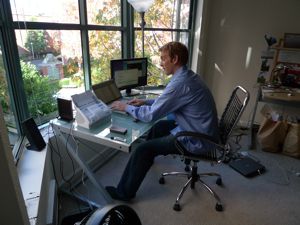 It’s where it all happens…

The other day I met with a startup who was doing work in the real time video streaming space. We were at a restaurant with WIFI attempting to demo the application but saw many of the difficulties in running an application that depended on the availability of high speed internet. We were able to test the broadband connection at Speakeasy.net which provided some of its own servers to do speed tests and found it was ok, but also talked about the other touchpoints which slowed the application down, such as the distance one was from the server on Earth.
I went home and thought to test my own connection and…found it was unbelievably slow. Geez. What was wrong? I had seen problems before with the wireless connection and thought that maybe it was the building, or electromagnetic waves interfering. The walls were definitely a problem as they were thick concrete, and I think there was a lot of sheet metal in there too.
A few months before I had called the company who supported the internet into my building. Supposedly the pipe into my building is a dedicated fiber optic connection; tons of bandwidth for everyone here, even those who were running businesses out of their apartment and all of those hungry iTunes downloaders, or Youtube/Hulu consumers (one of which was me). They tested the connection on their end and found that to my condo, there was no blockage or lessening of bandwidth. I just wrote it off as the weirdness of my condo and its walls and electromagnetic makeup.
But then I saw problems in my other systems. My AppleTV was unbelievably slow in syncing. Downloading from iTunes was super slow. The connection to my Time Capsule was constantly interrupted. Something else was amiss.
So not wanting to waste time diagnosing, I went and bought a new wireless N router and some 10/100 switches to replace all my equipment, which was probably around 2 years old now. All of a sudden, the network jumped in performance. Somewhere between my old wireless G router and the ethernet switches, it had crapped out and caused the wireless and the internal network to slow to a trickle of what it was supposed to be. Now I was back up to speeds that matched the claims of the fiber optic internet connection running to the building!
These experiences have taught me how to spot troubles and diagnose problems in my home network by myself and fix problems. But there are way too many points at which the system can fail. Over time, age, power surges, whatever – all can toast my equipment one by one, robbing my internet enabled equipment to crawl to a stop. I can’t imagine the layperson being able to spot, diagnose, and fix their internet problems by themselves. It’s an incredibly complex system from where the internet enters my condo and gets to all my internet enabled equipment.
I can only hope that someday all this will become simpler and more stable….