As I talk to entrepreneurs, I find there is almost always a focus on the “How”.
By “How” I mean that entrepreneurs are very feature driven. The notion that the entrepreneur can build a better product or service is a primary driver for wanting to enter into a market. Whenever I talk to them, the conversation is always down the path of “users can do this and that on my site and they can also do this and that, and oh by the way they can also do this” with the underlying reason being that I should be totally impressed, think this is totally the greatest thing in the world, and thus it can succeed wildly in the marketplace.
In some cases that would be true. These cases would be in:
1. Current competitors have not innovated for years, and that the marketplace has become totally stagnant OR commoditized, where the competition is on things like price and not features.
2. Current competitors are non-existent or very few in number.
3. Current products/services do not exist that enable the task to be done in other ways, sometimes totally awkward or cobbled together ways.
In today’s world, with Web 2.0 companies sprouting like weeds, it is hard to find an area where those 3 cases exist with the exception of Case number 1. The unfortunate thing about Case number 1 is that many others have also seen opportunities there and are working, many times in stealth, on projects in the area of Case number 1.
When I talk to an entrepreneur, often the conversation goes like this. They tell me what a great idea they have. But then, I think a bit, and reply that here are X companies which are touching on or allowing people to do what you are providing. They then reply that these guys are totally not competitors.
In every case, this is strictly true. It is not the company’s mission to compete directly against what the entrepreneur has come up with. The aggravating factor is that consumers don’t care necessarily care about what the company wants them to do; they are creative enough to use the company’s tools in ways which cause an unintentional competitor to emerge to the entrepreneur’s product or service.
This leads up to the “Why” aspect.
I tell entrepreneurs that “How” is not the problem. They have thought up great features, coded up great technology. They are smart, resourceful, and can build the best of the best of the best. But in a world where there are companies out there muddying the marketplace with actual competitive, near-competitive or unintentionally competitive products to the entrepreneur’s product, it can’t be about the “How”; it’s not enough. They need to focus on building a strong “Why”, which is the answer to the question “Why yours versus someone elses?” in the mind of the consumer.
Why is a consumer going to use my product instead of someone elses?
It’s the essential question that must be answered and then hammered into a consumer’s mind so that they will steer in your direction when trying to get something done. Because if there is not a good “Why”, consumers will always go back to the other ways of doing things, even if they are harder.
This is because it is more familiar, it is safe, and they don’t need to learn something new. Something works, so why change? If it ain’t broke, don’t fix it. They’ve already invested tons of time and effort in the old thing so why bother with something new.
It is why I push on the “Why” aspect with entrepreneurs so much. I don’t need to be impressed by the technology; I get it. I can see why it is (or isn’t) better than other things out there. Others will see it too. But they need to know why they should come over to your product and leave all that familiar, safe, conservative legacy behind. They need reasons to use your service.
Anybody can build great stuff – the “How” is taken care of. My argument is to build a phenomenal “Why” and you may yet compete sucessfully in a place as crowded as today’s Web 2.0 world.

Sitting at a coffee house this morning eating my breakfast, I brought a pile of magazines to read. One of them was PC Magazine, Nov 7 ’06 issue which featured 99 surprising new websites. Between articles like this and TechCrunch, I always like to look at what else people are working on.
But as I read through this website list, I thought about a web application that I discussed with a friend yesterday. It was a very early conversation where an entrepreneur has an interesting idea, but I felt it needed more work to take it beyond just a tool to something bigger. As I read through the websites in PC Magazine, I encountered one that was a content website. But it also sparked an idea related to the one that an entrepreneur had. So the area in which the content website played created a possible improvement to the entrepreneur’s idea. I had not expected PC Magazine to help me with this entrepreneur’s idea, but then isn’t that how creativity works sometimes?
I find that expanding one’s view, as well as experiences, increases the chance for creativity. Our brains have more information to link and cross link together in new and unique ways. It is why I consume tons of reading material from all subject areas. Magazines like The Economist, Popular Science, PC Magazine, WIRED, BusinessWeek, Discover, DWELL, Time, Runner’s World, Newsweek, Triathlete, Esquire. Books from science fiction to novels to non-fiction in all areas. It is also why I have traveled a lot; experiencing other places, cultures, and people also helps to expand my creativity.
A long time ago, my art professor told me about traveling and its relationship to creating art and design. I did not fully understand what he was talking about until the broadening of my experiences happened. It made me my creativity more powerful simply because I had more to draw from than just from my imagination.
Broaden your experiences. I am sure it will work for you as it did for me.

Last year, a friend of mine working on environmentally aware chocolate, Sweetriot, invited me to visit them at their offices. She says, “Come on over to the Starbucks on 1st and 54th where we have our offices.”
“Offices? Starbucks?” I thought, “this is peculiar!”
I got up there to find that their whole complement of 4 employees (1 CEO/founder, 3 interns) had been staking out a corner at this Starbucks for months now. 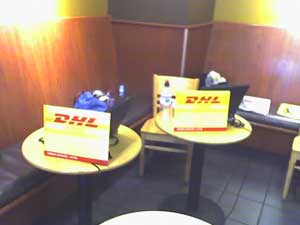 How funny to see them conducting marketing surveys with people in one corner, while others were checking email and planning at another table, and all of them had DHL envelopes propped up against their laptops because one of them had called DHL to pickup a package at this Starbucks. I’m sure the DHL guy probably did a doubletake when he showed up!
Office Away From Home
Also last year, I met up with some guys over at Blinkx and they recounted to me on how, in their travels around the U.S., that Starbucks has become their office away from home of choice. They just open up their laptops, grab a latte, set their mobile phones on the table and start working. All their calls are routed to their mobile phones so nobody even knows they aren’t in the building. Messenger is up and running as well as emails – their virtual office is complete and great coffee and eats are just a step away.
As I work on David Shen Ventures, LLC thing, I find that cafes have become my virtual office. I joke that I am in some coffee shops so much that I should post office hours on the door, ie. Dave Shen at Coupa Cafe between 1pm and 4pm – sign up for time here.
It’s actually pretty nice. There is WIFI, good ambiance, and a never ending stream of people. The best coffee shops don’t have a lot of ambient noise and just have a low level of music playing in the background. Most annoying is the shriek of the espresso machine milk frother as they heat up milk for the drinks.
But I find that being not in the same place, like an office, sparks a lot of creativity and I get a lot done by not being in the same place all the time.
It’s also a helluva lot cheaper than having a real office. Someday perhaps (sigh)….
Privacy is sometimes a bother. Trying to have a conference call or meeting about confidential stuff is tough, whether VC financing terms or new top secret product plans.
Passing the Social Test
Occasionally I bump into people I know especially in places such as Palo Alto. Socially, it’s been great – when working as a one-man show, you don’t have a big company campus to go to and interact with people. After seeing one person that I’m working for now, he remarked to me that I had passed the Guy Kawasaki’s Stanford Mall test:
How to determine whether or not you should work with a given VC – If you see your VC across the plaza in the Stanford Shopping Mall, you have three choices.
1. Go over and say hello.
2. Say hello if he or she notices you.
3. Avoid him or her at all costs.
Kawasaki recommends to only work with a VC that you would choose option 1 for.
It’s nice to know that this applies to cafes as well…! Well, I’m not really a VC either….
Postscript
Hanging out in cafes means you probably are drinking way too much coffee. I started getting into 4-5 cups a day. Way too much and ruins my pearly white smile. Next drink of choice: Pelligrino or equivalent with lemon or lime, or Green Tea sweetened, either cold or hot.
By the way, free WIFI sucks unless the cafe is providing it. I bought a Verizon Broadband card in case the cafe doesn’t have WIFI and that works great.
Up and coming – launch Meetro and maybe you’ll meet someone new…!

Circa Oct 2006, FanLib in their West Hollywood office:

Thank god for the Polycom USB Speakerphone and Skype to allow us to connect with remote team members!

Already outgrown their one man office plus reception area, they are set to move by the end of the year.

Circa Sept 2006, Meetro at their Cowper St., Palo Alto office where all the guys were piled into an apartment:

Some of them lived there as well! Imagine doing job interviews in one of the bedrooms…!

I’ve encountered this many times already in silicon valley. Often companies will start in someone’s apartment in an attempt to save money, and eventually we see a whole full blown office show up there courtesy of IKEA furniture. They’re now in a cool office in SF – pictures coming up soon…!