My buddy Maneesh Arora asks:
Have you successfully been able to get pro-rata rights as an angel (assuming putting in small-ish amounts of money of $25k or $50k, something along those lines), on Convertible Note deals?
This was in response to my old post Taking Your Pro Rata as Angel Investing Strategy.
First, given that I’m at Launch Capital now and our investment sizes are $100K-$150K, we typically fall into the camp of auto-qualifying for pro rata rights in equity deals (many equity deals have a restriction that only “Major Investors” get pro rata rights, with a “Major Investor” being defined as someone who invests a minimum amount of money).
I looked back on the last few deals I have done, both equity and convertible notes. With respect to pro rata, I have found:
1. Most angels don’t invest pro rata or they don’t understand the effect of pro rata investing, so they don’t speak up when the round doesn’t give them pro rata rights for whatever reason.
2. Bigger funds tend to put limits on who gets pro rata and who does not on subsequent rounds. It would seem natural that they would want to keep as much ownership as possible, and future ownership rights too.
3. Smarter entrepreneurs will use pro rata rights to entice every investor to put in more money. But that does not help the angel who simply does not have enough resources to produce the minimum amount.
4. There are investor entities who are more friendly than others to angels in the round. They tend to give pro rata rights to everyone regardless of the investment amount, on the belief that we are all friendly, invest together often, are thankful of everyone’s help, and want everyone to get the chance to participate in the upside.
5. Being useful, friendly, and present to the CEO increases your chance that you’ll get pro rata rights. Or you may get the chance to put more money in subsequent rounds even if you don’t have pro rata rights.
6. A more direct note to Maneesh’s question: Convertible notes do not guarantee pro rata rights of any sort in the next round. Even if you put those terms in, rarely do those terms express themselves in the next round since they tend to be subject to the new investor’s negotiations. I have rarely seen convertible note terms beyond interest rate accrual get honored. Even during acquisition, any kind of terms that award investors a multiple of the investment may not even get honored.
This is why Convertible Notes are not investor friendly at all, despite the fact that they are the dominant investment structure out there today.
So more money always talks, and smaller amounts don’t give you much negotiating power, nor your pro rata rights, and this is why you must strive to move up the value chain as an investor, angel or otherwise. That can be hard if your resources aren’t enough where you can come up with that much money.
HOWEVER, I still believe that if more angels spoke up, then potentially we would, as a group, have more ability to obtain pro rata rights for all involved and not just “Major Investors”. This is worth going out to angels and getting them more educated on why pro rata investing is important and why they should ask for those rights and walk away when they don’t get them.
Still, investing in your pro rata for as long as your resources can enable you to will allow you to maximize your portion of future success in a startup.

Last week I got my Lytro from pre-order in the mail and was excited to try it out in the field. I went to the California Academy of Sciences in SF to see what it could do. 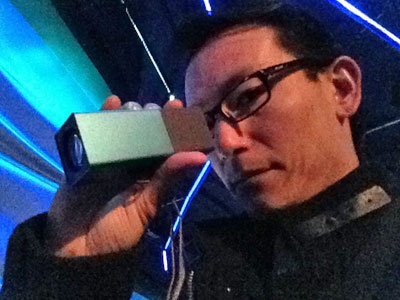 About the Industrial Design
It fit well in the hand, although I was very scared of it slipping out and me dropping it. Since it is in a horizontal configuration, I wish it had a palm strap like camcorders do. The wrist strap was OK, but there was no way to tighten it on my wrist and I felt like it was swinging precariously as I walked around. Most of the time I just stuck it in my bag.
The magnetic cap in front was slick, but it kept falling off when I removed my camera from my bag. Couldn’t they have figured out some way of doing a built-in iris protector or attached cap? I’m pretty sure I’m going to lose it at some time in the future. At least a screw on cap won’t fall off, even if it is a pain to get off. Snap-ons might work but they aren’t perfect either.
The on/off switch is a small depression the bottom of the unit. It was hard to find, but eventually I got the hang of just pressing generally where it was.
There was a zoom but I totally didn’t know about it until I got home and read the instructions – who reads instructions right? This is a small row of dashes on the top of the unit. I suppose that could be better and more clearly labeled.
The button to take a picture was a small depression on top. I think I got the hang of where that was to take pictures.
The screen was too small in my opinion. You can press on it to refocus into some area, but the image was so small that you couldn’t tell if the focus changed or not.
The UI in the camera was pretty simple. At least there are no fancy menus to confuse you. The point is to just shoot a lot and not worry about things, right?
Images
Reviewing images on the tiny screen sucked. So I downloaded them to take a look at home. Most of them were pretty good. Image quality is up there although it doesn’t match up to my favorite camera, the Canon G12.
It even seemed to deal with low light fairly well. The lens seemed set at f/2, supposedly to minimize field of view and get you the nice blurred surroundings effect. Noise seemed very limited.
However, I did not really enjoy what I perceive to be the main cool feature of this camera, which was to be able to focus in on different parts of the image while other elements blurred out. After just shooting around, I only had one image out of the whole set which I could do this with, an image of some funky blue jellyfish:

Try clicking on some of the jellyfish, especially the ones in back. Very cool indeed!
So here is where my issues begin.
In order to see the coolness of the camera, I now have to think about the what is in the scene to make this feature come alive. I have to take pictures with things very close to me in the foreground, and then have things in multiple distances all the way into infinity. In that way, the blurriness is accentuated and I can pick around the image to see this happen. Most of the images I shot did not have this quality, and were good images but you can’t really see any blurriness come out when you pick around the image.
This is what happened when I bought a 3D camera, the Fujifilm Finepix Real 3D camera. I had to also think about what I could shoot that would really highlight the 3D-ness of the resulting image. If I just shot some random shot, the 3D effect may not really be noticeable because the elements are too far away and everything still seems flat, which is arguably what you would see in reality.
This makes me think too much. I want the camera to do magic, not make me think about how to make magic. If I wanted to think (and I do with my Canon 60D) then I would just use my old cameras.
But I think we’re in an era where we want cameras to take magical pictures, almost pictures of what we perceive, not what we actually see, or what physics says is out there in the scene.
Take high contrast scenes where there is brightly lit areas inserted in darkness for example. Most cameras fight to figure out how to expose such scenes. Bright light areas often are too bright if you try to expose more of dark areas. Or if you try to expose the bright light areas to get more detail there, then all of the darker areas go black.
However, we do not remember such scenes like that – our eyes are darting around and readjusting what we focus on, and our memories are of what is in the bright areas as well in the dark areas. Certainly there is artistry that results from high contrast images, taking the dark areas and making the mysterious silhouettes in the brighter areas. But sometimes, we want magic to happen. We want to see what is in the bright areas and more detail in the darker areas without having the bright areas wash out.
So I want magic and I want reality when I want them and don’t want to think. I just want to shoot and see awesome results.
This is where I think smartphone cameras like on the iPhone are really the next wave of photography. I would meld Lytro with a image computer that can take both reality and imagined reality and then produce the result I want later with ease and not making me think about the technology. I just want to shoot and have magic come out the other end.
Lytro has some really cool things going for it. As a first iteration, it’s pretty cool but I think I’m demanding more from cameras these days.