What startups don’t need more of:
1. Funding – if you have a great idea and team, you should be able to find money.
2. Smart people – Universities like MIT, Stanford, UC Berkeley and the like, are churning out 1000s of smart people each year. You may be smart, but you’re a dime a dozen.
3. Great ideas – Generally, if you have a great idea, you can get funding. You can even get funding for a mediocre idea if someone likes you. Given the explosion of startups, there doesn’t seem to be a lack for ideas.
4. Effort and Sweat – There is no lack of motivation to build either a company or a product. Given defined problems, there are known paths to building great usable, useful, and desirable products as long as you put in the time.
What startups need most of today are:
1. Experience – most entrepreneurs are young and haven’t worked much in industry. They need business savviness and experience either on their team or mentors who are willing to put in the time to handhold inexperienced entrepreneurs. Of course, entrepreneurs need to be open, willing to hear feedback, and to learn from it.
2. Contacts – Following on 1., if you haven’t been in industry long, then you haven’t had time to network properly. Getting the proper introductions can make or break a new business.
3. Monetization – Every startup needs money, but how to get it? Some of this related to experienced persons being involved and creating a business model; some of it relates to working with a platform to accelerate monetization.
4. Distribution/Customers – Whether you’re a consumer or B2B startup, you need customers. For consumer startups, how do you build a customer base when users are bombarded by invites to “great and new” services and everyone’s attention is drawn in a 100 different ways? For B2B startups, how do you find the right people to talk to in a business and get them to accelerate their process to buy your serivce?
5. Hiring – There are too many startups and not enough people to work in them. This is because every entrepreneurial person wants to be their own founder and are not OK with a small percentage of another company. The fact that not every smart person that is out there is fit for a startup means the available pool of hires drops dramatically.
The persons, platform, and/or organization which solves these problems for entrepreneurs is going to make a killing…!

These last two weeks were a whirlwind with YCombinator happening and then the subsequent meetings with their entrepreneurs afterwards. It was a great event and very tiring and brain draining with 36 companies to listen to. Hollywood was there with a guest appearance by actor turned angel investor Ashton Kutcher and wife Demi Moore.
One interesting thing that did happen was that everyone was raising money in convertible notes. Paul Graham tweeted out this fact: 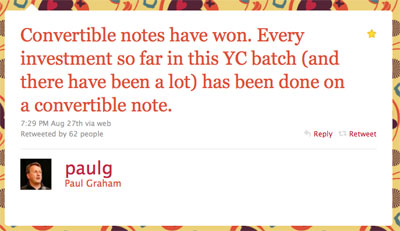