Miso Music is a new startup creating an amazing new iOS app that allows you to learn and play stringed instruments by playing your own instrument. No need to plug a cable from your guitar to the iPad – you just sit it there and it listens to you play and knows what notes you play. They won the People’s Choice Award at TechCrunch Disrupt 2010.
Here they are in their office in Santa Monica.
Nice art deco type for building number – very Hollywood! 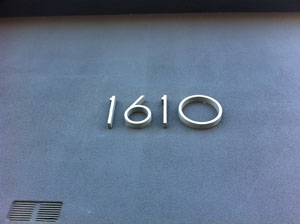 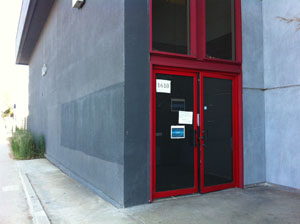 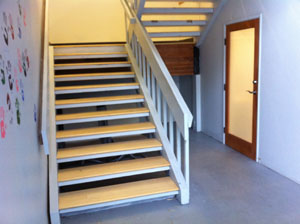 Two pugs jumped on me when I walked in, now they’re bored of me and are sacked out on the couches: 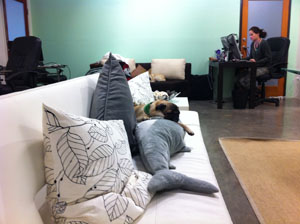 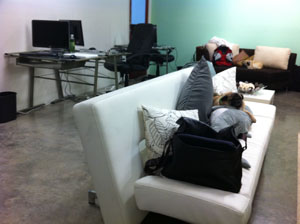 A buddha guards the front door:

Chandelier and candles on their main conference table: 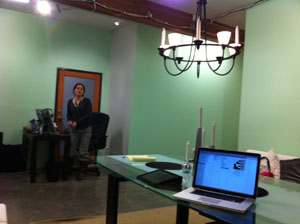 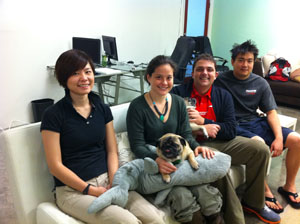 Look for their incredible app this spring for iPhone and iPad. I’m gonna buy a guitar soon!

Friday afternoon, I had the pleasure of jumping on a conference call with one of my current potential investment’s customers. It was a rare occasion where an early stage startup actually had a customer testing their product and I was able to get some feedback on the startup from a customer’s perspective.
The call was thankfully overwhemingly positive; the customer had implemented the startup’s system, and it installed and ran without a hitch. We found out that the startup’s personnel were extremely easy to deal with and were extremely responsive to issues. We also found out some nice, unexpected results of the installed system; it gave them some enhanced marketing functionality, and they found that they increased sales by quite a bit after using the system! Of course, the customer was extremely happy about that as well.
All this served to reinforce the positivity on investing in the startup. It was very refreshing to hear all the great things a customer had to say about this company!
A little while back I wrote a post called The Lack of Due Diligence is Appalling and Foolish. In my experiences as an angel investor, I was shocked to find out that often I was the only investor asking for due diligence materials from a startup raising money. Recently on Quora, I suggested some other due diligence things people should do. Calling a startup’s customers is one of those that should be done. Some thoughts on this:
1. If you’re fortunate enough to encounter an early stage startup that has customers and are accessible, definitely try to give them a call. Many early stage startups are in the very beginning stages and don’t have customers yet so sometimes it’s hard to be able to talk to them at all.
2. Customers who are the average consumer are harder to talk to directly than customers who are businesses.
3. For consumers, you may not be able to talk to them directly at all, but must rely on customer feedback, or public reviews on other blogs, magazines, etc. Occasionally, there will be some prominent beta customers who you may be able to get hold of directly.
4. Businesses are potentially much easier to contact. There is usually a point of contact over at the customer and, if they are willing, you can talk to them.
5. Ask the entrepreneur to make the contact and introduction to their customers. I would also recommend that the entrepreneur should set the context with the customer(s) but ultimately should not be on the call/meeting. This is so we can get a unbiased view from the customer without some possible social interference by the presence of the entrepreneur.
If the entrepreneur is unwilling to facilitate access to their customers or hedges against it for any reason, be wary. A startup should NEVER EVER disrespect an investor’s request for any kind of due diligence. If they do, this is a red flag. You should reconsider investing in them.
6. A quick phone call should suffice, or even better if the customer is local and you can go meet with them.
7. If there are more than one people on a call or at a meeting, you should consider discussing beforehand the questions that will be asked. In this way, the call/meeting can go quickly and in an orderly fashion. Customers, whether they are consumers or businesses, are as busy as you or me. We should respect their time and not waste it by being unorganized. Then organize the questions into a written list and have it handy to refer to during the call. You can print it out and scribble notes as you walk through the questions.
8. Here is a possible template of a due diligence call and topic areas to ask for a typical product; adjust/edit/add as necessary given the particular startup and its products:
Introduce yourselves, and say why you’re calling (ie. we’re potential investors in company X, and we’d like to know more about your experiences with company X and its products)
How did you first encounter the product? What were the first impressions?
Describe the signup process.
Describe the installation process.
Describe the product experience itself from your perspective. Any positive and/or negative experiences?
How did the product perform? Did it do what you thought it would do? Was it below/meets/exceeds expectations? How so?
Describe any problems in the product that you see.
How much does the product cost? Was it too much? Too little? Just right?
Did the product enhance your life/operations/sales/task/etc.? In what ways?
How were your communications with the company, if any? With the company personnel? With their customer service? Through email? Through marketing materials? Any positive and/or negative experiences?
Would you recommend this product to a friend/colleague/co-worker/another company? What would you say to them?
Thank them profusely for their time, end call.
Yes we’re all way too busy. But making time for these calls, and ultimately going through due diligence on a startup can really make a difference in your decision process. As I’ve seen on calls like these, I not only gain more assurance that I’m making the right investment decision, but I’m also learning a lot about a startup’s business from a perspective that is often very difficult to get hold of.