I just got sent a link to Wordle, a fun tool that takes a block of text and creates a word cloud of the text. Check out my bio washed through Wordle below. Interesting to see one particular graphical representation of the information therein:

I am a huge Netvibes user. I find it’s one of the best start page/RSS reader aggregator services out there. Before Netvibes, I used My Yahoo! but somehow Netvibes’s GUI seems a bit easier to use.
I just discovered that you can publish a feed of everything you do on Netvibes. I’ve been looking for this function in other services but am ecstatic that it’s here. So now, I plan on sending every article I read to my Netvibes activity feed. If you’re curious what I read across my RSS feeds, subscribe to it! I’m also putting this link in my right hand column of this site.

Interesting new widget from my buddy James at hotornot.com.

I can put the persons, places, and things that resonate with me in this widget which denote what’s cool, influential, and important in my life from brands to people and anything. Pretty nifty. I think a way to express this is actually kind of interesting. No other way exists that I know of to do this.
We always express ourselves by the things we wear, or who we talk about or idolize. But we have primitive tools to make this known. We cut out pictures and paste them to our wall. We buy clothes and wear them. At least with this widget, we have an easy way to pick out those things that influence our lives and let others see them.
Something interesting to watch…. 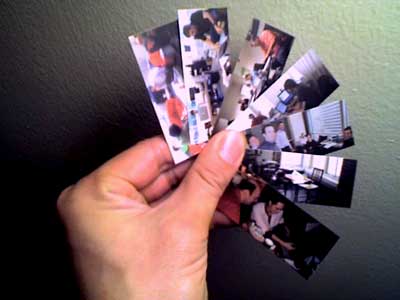 These Moo cards are really starting to take my brain and feelings for a loop.
The impulse to make more is staggering. It takes a huge force of will to not go and upload more pics and order more.
When I order them, my intent is to use them as a personal ID card or as a unique business card design. But I find that when I get them, it is super hard to part with them. I like them so much that it’s hard for me to give them away! I think it’s the fact that I took those pics on the backs. I have a deep attachment to them simply for that fact alone.
It’s also their novelty and size. The slender aspect ratio of these cards makes them almost cute and you want to own them. I can’t part with them because they are so keep-a-ble!
Then when I show them to others, they like them too. But they won’t take just any card; they want to pick. They look carefully through them and only pick the one they like. Or take more than one. How strange. They want that special one that appeals to them alone, even though I took those pics and like them all.
It is even more pronounced when I show my biz cards. In case you didn’t know, the backs of my business Moo cards have images of my startups that I take on occasion to document their “Making Of”. So when they take my Moo cards, they don’t want some strange image or dudes on the card backs; they want something that is familiar to them, like either their own company or if they know the people.
Moo cards are strangely addictive and produce such interesting reactions in myself and in others. I think I am going to need some MOOOO therapy soon to figure this all out…

One day, I saw someone handing out these small photographic cards with their contact info on the other side. They were photos that this person had taken and I thought it was a great idea to meld photography, or life imagery, with a personal identity system. I was hooked. I had to make some too! Enter Moo.com . 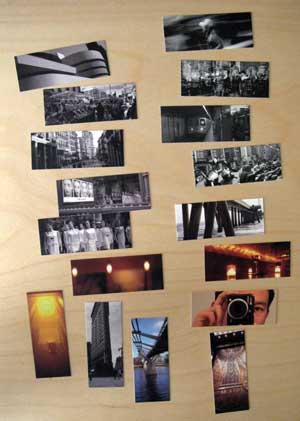 Moo.com allows you take photos from flickr or bebo and make cool business cards out of them. These can be from pictures you have uploaded into your own account, or they can be semi-randomly selected from the gazillion photos on either service.
I took some of my own favorite shots and uploaded them into flickr. Then I went to Moo.com and they have a great interface for selecting which pictures you want, cropping them, setting up the text on back, and the ordering them.
For one batch, the result wasn’t that great; they sometimes don’t print so well. However, my second batch came back really cool and you can see them in the picture above. The second batch was a personal business card and I just ordered another batch of business cards, with candid photos from all the startups I work with on the back.
I love the way they make printing these cards so easy. It’s also an interesting way of expressing yourself (or your business) through the use of photography, a lens into the world through your own eyes. Something to share, something to tell your own story with.
I can’t stop ordering these cards!

Something about this pictures navigation really appeals to me:
Asia Grace
It allows a hierarchical drill down into images. I like the rollover feedback of selection by outlining. I can see many applications of this technique on other sites.

Recently there has been a bit of press regarding LinkedIn. Also, I’ve noticed that there has been an uptick in LinkedIn invites lately. A lot of that has happened when former colleagues at Yahoo! are thinking about leaving and they realize that they don’t want to lose their connection with previous colleagues, or they want to renew their connection with those who have left.
I too find LinkedIn to be quite useful in finding old colleagues. For David Shen Ventures, LLC, I am often recruiting for positions in my companies. And I have found that my social networking site memberships have been extremely useful in finding and contacting people. To date, I have used Friendster, Yahoo! 360, and LinkedIn the most in locating folks. Surprisingly, our Yahoo! alumni network Yahoo! Group doesn’t work so well. I think that Yahoo! Groups is probably the old generation social network and needs to be updated with today’s functionality. It is too limiting in its ability to let members communicate with one another. The membership is private and it only allows broadcast of messages out, which so far has proven to be not very helpful at all.
On LinkedIn and Yahoo! 360, I can contact people directly and a personal message has been much more effective at reestablishing someone whom I have not talked to in a long time.
Through my connections, I am tied to literally every Yahoo! that ever worked there. It is quite amazing. Of course, LinkedIn is much more informative from a recruiting standpoint since people post their company info there.
If you think about the way Web companies go through cycles of waxing/waning success and employees go through their own mini-cycles of entering/exiting companies, it seems that LinkedIn usage is tied to these cycles. It would be interesting to do some research into correlating industry and personal events to traffic and usage of LinkedIn and other social networks.

Everyone was super impressed when Google Maps came out, all decked out with Ajax and an API for others to hack into. Their maps heralded an age of mashups and rushed copycats from competitors like Yahoo!.
The other day a buddy of mine shows me Google Maps on his Treo. I go “WHOA”. It’s got the same type of AJAX-like interaction as the web site! You can drag it around and when you go off map, it automatically connects to the Internet and grabs new images. You can also put it in satellite mode and surf around locations while looking at real buildings!
The real kicker is this. You can look up businesses on the map and get directions. What a godsend. Up to now, yellow page applications have all sucked on mobile phones. Now Google Maps Mobile makes it all worthwhile. You look up a business, little pins denote business matches, you click on one to get more info, and you can get directions to go there.
And thank god for the Google war chest to fund dedicated apps for a whole suite of mobile phones! I also downloaded Google Maps onto my Motorola SLVR and it works a little bit hokey in the sense that it keeps asking me for permission to connect to the internet, but it also performs wonderfully.
Find this and more great Google Mobile apps at http://www.google.com/mobile/. The Google Maps Mobile app is available at http://www.google.com/gmm/. Now I must try out Gmail for Mobile phones….

I just recently rediscovered Yelp, a website which uses the community to rate businesses. When it first came out, I got invited to signup and I did, but I didn’t really do much with it.

Then I began using it to lookup places to eat in hopes of using other peoples’ opinions to sway me one way or another. It was my hope that the opinions of Yelpers would help me better than using Zagats, which, to me, is no help at all.

Why is that? It’s because Zagats has EVERY restaurant in the universe in there. How do you pick from a list of a 40 5-star restaurants? They all seem the same given the text descriptions. Maybe it would be better if they had pictures, but they don’t. Generally, it doesn’t cater to my tastes in particular.

The Black Book series of city guides has been the best thing so far. Somehow I’ve connected with the reviewers who put that together and they’ve consistently picked restaurants that I know I like. It’s the best guide for me out there.

I hope that Yelp can become the same thing for me.

But most importantly, I wanted a place to remember where I went and how I felt about it. Yelp provides a nice GUI to do that. And they have a nice mobile implementation to be able to look up stuff while on the go.

Check out my Yelp reviews with this handy module:

Do your tastes mirror mine?

How about some Web 2.0 overload? Looking for a new job with a crazy startup?
The favorite gathering place for Web 2.0 businesses has always been Michael Arrington’s Techcrunch. Here’s a few more:
The Go2web2 Blog of Orli Yakuel
and her amazing Flash powered Web 2.0 company navigator:
Go2Web20.net – The complete Web 2.0 directory 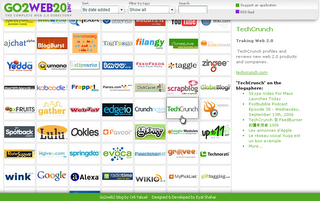 An older list of Web 2.0 companies from Baris Karadogan, Partner at ComVentures dating back to March 2006. Many new companies have emerged since then.
All I can say is “let the buyer beware”…. Creativity run amok is cool, but make sure you go deep and seek substance.